Last week, as I returned from summer to start my 29th year as a teacher, I was thrilled to see the walls had been freshly painted.

It was probably the first time that had happened in fifteen years or so.

The summer workers, though, had clearly needed to pull pieces of furniture away from the wall to paint, including one of my three file cabinets. 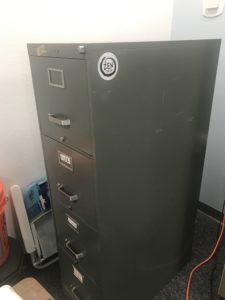 This one was in the corner of my classroom; the other two are in my office.

After some typical pre-school year meetings, I started to put my classroom back together.

Part of that included walking up to that file cabinet and attempting to shove it back into the corner.

But there were two problems: 1) It wouldn’t budge and 2) The last time I had been in a gym they were full of Jane Fonda-style leg warmers.

In other words, that file cabinet wasn’t going ANYWHERE.

I talk a lot about creating space around here.

I talk about subtraction.

I talk about reducing things to their essence for the sake of simplifying our lives.

Maybe, I thought, it was time to put my money where my mouth was.

After all, in the last few years people have started calling me The Zen Teacher.

In fact, look, it says so right there on the file cabinet.

So I made a decision: The file cabinet had to go.

Sure, I’d been TALKING about jettisoning the old dinosaur for years. . .

But it was finally time. 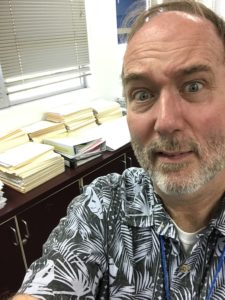 While emptying the file cabinet only took a few minutes, the REAL challenge, as you can see here, was going to be eliminating or re-locating the files, some of which I’d had for many or most of the preceding twenty-eight years.

I had some tough choices to make.

It was actually rather emotional. Many of these files, though not all, included activities I’d done over the years with classes that I truly loved and these assignments MEANT something to me.

What was I supposed to do? Just throw them away??

As it turns out, yes.

That was PRECISELY what I was supposed to do.

I filled an entire outside trash can and blue recycle bin.

Gone were the old assignments from The Great Gatsby.

Gone were The Catcher in the Rye discussion questions.

Gone were the “fun,” but ultimately useless poetry activities.

Gone were the packets and the student work examples and the copies of non-fiction articles and the training manuals from PD workshops from 2009.

And finally – if you listen closely, you can hear the swish into the trash can—gone was the high interest To Kill a Mockingbird graphic novel, comic book thing-y that I’d kept for decades just in case I ever wanted to use it.

Before long my clothes were full of cobwebs and old file tab labels and manila folders were strewn everywhere.

At one point the custodian came in, sighed, and said, “I’ll get you some more trash bags.”

Within two days, I had relocated the handful of file folders I wanted to keep (which involved cleaning out a drawer in one of my OTHER file cabinets in the office). And a day or two after that, the aforementioned custodian whisked the empty file cabinet off to wherever old file cabinets go.

As you can tell by this last photo, I created just a little more space in my classroom.

There is a greater feeling of expansiveness.

Put another way, in a classroom that is typically pushing nearly forty students every period Every. Bit. Of. Space. Counts.

So my challenge to you is to look around.

And as a wise woman (and princess friend of a local Norse-named snowman) says:

*Sorry for the earworm.