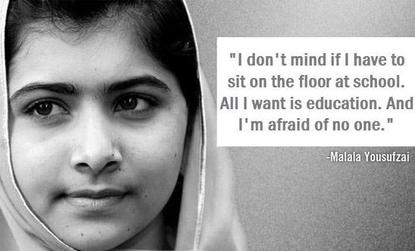 In I Am Malala by Malala Yousafzai, the young protagonist faces incomprehensible challenges.  The Swat Valley of Pakistan where she lived, for example, was caught in a lethal vice between an impotent, but omnipresent national army and The Taliban terrorists who were bombing her homeland to dust.  These same zealots routinely threatened the citizens, especially women, if they did not adhere to strict religious edicts, and censored and suppressed the citizens’ access to media that would give them both thought and alternative voices. Furthermore, she endured Taliban suicide bombers who targeted local schools, reducing the buildings to rubble and injuring and/or killing innocent school children and teachers in the process.  And then, when she first wanted an education and then spoke out in favor of getting one (and, given her culture and gender, the fact that she was getting one at all was, by itself, no small miracle), she weathered not only persecution from her neighbors but, as it turns out, sadly credible death threats.  Finally, as she refused to stop attending school or speaking out in favor of an educational system that honors and values both genders, she was hunted down, shot, separated from her family, and came frighteningly close to losing her life.

As much as I am both horrified and inspired by her story, I can, of course, relate to Malala’s plight in only the most intellectual, superficial level.  In a world where one of my greatest challenges is that Time Warner might turn off my cable from lack of payment and my family won’t get to see the next episode of The Amazing Race, I have absolutely zero idea what it means to go through what she’s gone through.

And of course my first impulse after I finished reading was to take her story to my students, hold up the book, and say, “Here is a girl who was willing to die for what you have and risked her life to speak up for what we all take for granted each and every day of our lives.

Do you see this?  You’re lucky to be in these desks, no matter how boring you think I am.”  And yet, I quickly realized that sermonizing to my students wouldn’t help them understand.

About now you’re probably thinking, “Okay, Dan, where is the Zen?”

The Zen Moment here is not in what Malala’s story can teach my students, but in what her story taught me about my own life.  This young girl, who won the Nobel Peace Prize at an age younger than the age I was when I earned a driver’s license (to that date, my greatest achievement–and perhaps, still), taught me that maybe, just maybe, I could be a little bolder, a little braver when it came to my choices not only about education, but about life.

The Zen Moment here is that I can detach from my fears and my expected outcomes, accept what is, and then I can speak up.  I can start where I am and make change.  I can create peace in myself by creating a spiritual alignment between what’s in my soul and fighting for what I believe in.

I am NOT Malala, but maybe because of her inspiration, I can be a better me.

In the end, I will never ever, so long as I live, be the hero Malala Yousafzai is.  But the next time I hold back from speaking in a meeting about something I believe in, the next time I cower in the face of risk at trying something new inside (or outside) the classroom, the next time I begin to ignore my passions, the next time I must go up against forces that seem overpowering and intimidating, I will think of Malala and it will motivate me to push forward, to not be afraid, and to do what I must–even in the face of what seems unbearable because, if I remember Malala, I’ll know that it is not.