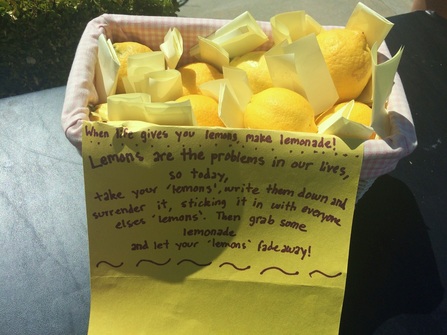 While it’s not unusual for kids to set up an occasional lemonade stand, the stand my two daughters and their friend set up a couple days ago was far from usual.

First, they decided that offering the ice cold beverage would not be a “for profit” enterprise. They said this lemonade stand would be all about the old saying, “When Life gives you lemons, make lemonade.”  They said they “just wanted to give back to people and make them feel better,” so they decided to stand on the street corner next to their card table waving a sign that said, “Free Lemonade,” with another sign that referenced the old adage.

Needless to say, I was very proud.  But on the designated day of the lemonade stand, one of my daughters woke up with an even better idea.

“We’re missing the other part,” she said, still groggy from sleep.

“We’ve got the lemonade,” she said, “but we’ve forgotten about the ‘lemon’ part.  People need to give us their lemons.  And that’s why they get the lemonade.”

When I asked her what she meant, she said, “We’re going to take some pens and Post-It notes and they can write down their ‘lemons’ and leave them with us, and that way they’re getting rid of their ‘lemons’ and that’s why they get the lemonade, just like the saying says.”

I was speechless: My daughter had just taken a lemonade stand and turned it into a kind of Communion.

By the end of the day, they had handed out 46 cups of free lemonade and gathered (as you can see in the picture above) a basketful of Post-It notes (including my own, which involved a water bill that, for some reason, had come in twice what it usually was).

Some of the other Post-It notes came from the lady concerned about her son because he had been recently been making poor Life choices, the college student who was stressed out over her classes, and the group of construction workers who laughed at their construction worker friend jotting a note until he very seriously said, “No, I’m doing it.”  Later, my daughters and their friend realized that his Post-It note concerned his young son’s recent diagnosis of Glaucoma.

From the stories my daughters told about their lemonade stand–the people who came by and their reactions and interactions with stand’s proprietors, and the sincerity and depth of the little, yellow notes–I have no doubt that it was a moving and powerful experience for the people who dropped by that street corner that day to enjoy a little libation.  And this, despite the fact that none of them realized that their Post-Its notes would later be prayed over by the three young girls–a simple act which added yet another, more profound, layer to the process.

Please learn from my daughters about the true nature of giving, caring, and kindness.