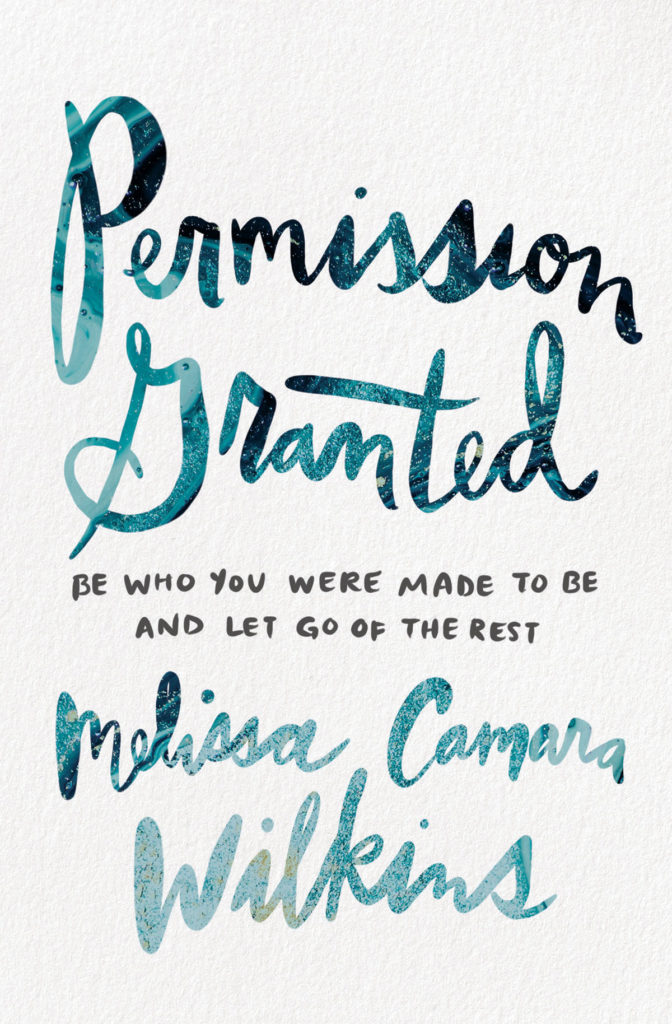 Have you ever wanted to hear a little voice in your ear whispering, “You’re doing all right. You’re enough. You don’t have to be perfect”?

I know I have.

And that’s why Melissa Camara Wilkins’ new book Permission Granted: Be Who You Were Made to Be and Let Go of the Rest was so satisfying.

(In the nearly five years of writing this blog,  I’ve never done a book review, but it’s time I made an exception).

I have been on Wilkins’ email newsletter list for years and have often benefited from this witty, thoughtful, mother of six’s practical and down-to-earth advice on how to live a simpler, well-adjusted, more centered life in the chaos that is our modern culture. So I was thrilled when I heard she was about to launch a book.

Permission Granted did not disappoint.

Let’s take a peek at some of the key ideas and sage wisdom she offers in its pages:

People are who they are for a damn good reason. Wilkins reminds us frequently throughout the book that not only are we okay the way we are, but that we became that way for a “damn good reason” and that there is no shame in that. A mind-blowing part of this idea shows up on page 20 (and is echoed throughout the rest of the book) when she says, “Maybe we aren’t meant to become better. Maybe we’re meant to become truer.” Truer to our actual self, and not the expectations that society foists on us because this, as she wisely shares, is where a great deal of the trouble (read: stress and anxiety) comes from.

Both/And. I love what she discusses around the idea of “both/and.” That means that we are complex creatures and that we don’t have to only be one thing. In other words, we can be BOTH a mess AND working toward being better. We can be BOTH kind AND have a grumpy morning. At least for me, that was a supremely revolutionary and liberating idea.

Being the best doesn’t work as a way of life. Being the worst doesn’t work, either. The only thing that works is being who you are, being who you were made to be. I can’t really improve on that with any comments, except to say that the rest of the book basically gives you powerful suggestions on how to do just that.

Here are some other mic drop moments:

(I’m really just sharing a fraction of the parts I underlined):

Busy feels important, but it doesn’t build anything lasting.

On being true to (and trusting) oneself:

. . .it’s about allowing myself to show up no matter what happens and trusting that if I want to belong to anything else, first I have to belong to myself.

The path is not leading you to a place of being more perfect and knowing all the things. It’s leading you to know yourself better and to understand more about the nature of things.

“You should” isn’t about me; it’s about them.

Love shows up in truth—and you can’t tell the truth while you’re pretending to who you think you’re supposed to be.”

(Yeah, that one stung a little, but soooo good, isn’t it?)

Learning how to live as a self with limits is simpler than pretending you have none.

You can go through life being who you think you’re supposed to be. . .Or you can give yourself permission to be who you really are. It’s that simple.”

And of course that’s not simple at all.

And it can take your whole life to figure it out.

And it’s those kind of ideas that come out of the best books we read.

If you’re looking for a sweet, funny, moving tale of one woman’s search for self, read this book.

If you’re looking for a book that that meets you where you are, doesn’t judge, and shows you a road map to get where you want to go, here it is.