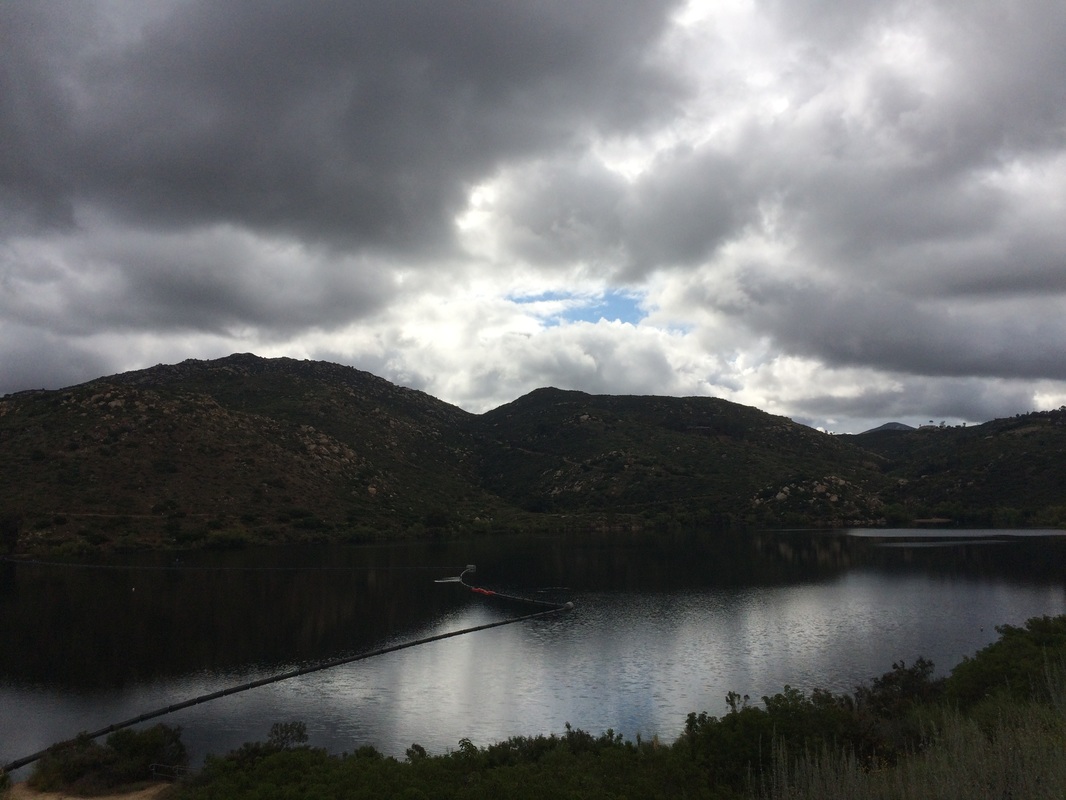 Lake Poway, 6:45 a.m., just before the Fun Run
Yesterday I helped my daughter’s middle school by volunteering at their Cinco De Mayo 5K Fun Run fundraiser at a stunningly beautiful location (Lake Poway, see above).  Several “course marshals” were stationed at specific points along the course, and it was their job to clap, whoop, cheer, motivate, and otherwise inspire the runners, joggers, and walkers to keep going and, nearly as importantly, to stay on the proper course by pointing to the red, blue, and orange painted arrows on the trail.

Interestingly, though, Lake Poway, where the race was held, was still open to the public yesterday, which resulted in a number of people coming by who were running, walking, and jogging and yet who were not officially part of the Fun Run.  And my daughter and I noticed an interesting phenomenon.

Even though the Fun Run participants wore numbered bibs, it was sometimes hard to tell who was participating and who was just out for a Saturday hike on one of the lake’s beautiful and inviting trails.  Nevertheless, no matter who came by, my daughter and I would clap and whoop and cheer and yell, “Way to go! You got this! Looking good!” or some other exclamation intended to inspire and motivate.

Invariably, though, we noticed that the non-participants would raise their hands, look down, wave away our exclamations, and dismiss our efforts by saying some variation of,

“Thanks. But I don’t deserve it. I’m not signed up. I do this every Saturday.”

Whenever that happened, my daughter and I would reply by saying, “That’s okay. You’re still doing awesome!” or “Still looking good” or “Hey! You’re still out here making it happen! That’s great!”

When I began to notice the pattern, I was curious, then confused, then heartbroken.

Yesterday I was reminded that, as human beings, we have a terrible time accepting praise, especially if we think it shouldn’t be directed at us. These people were out in the world, doing amazing things, and acting on their intentions, yet they repeatedly felt the need to deflect the praise for their efforts, as if they were even embarrassed or ashamed that a stranger might consider acknowledging them or showering them with praise.

But the truth is:

And everyone needs to learn not to deflect it when someone is offering.

So the next time someone praises you, resist the temptation to throw up your hands in a defensive motion, to deflect the compliment or praise, and then extinguish the thought that says, “Oh, not me. I’m not. . .That’s not right. . .I don’t count. . .They can’t mean me.”

Instead: hear it. Internalize it. Bask in it. Take a moment to sit with it and, most importantly, accept it. And then thank the person for noticing.

This is not arrogance. It’s not conceit. In fact, it’s healthy.

And the other side of that is this:  As Zen Teachers–and simply as decent people–it is our duty to notice, praise, and acknowledge the effort, action, and success of others. It’s our duty to make people feel good about their achievements, even when they wave you away.

Maybe even more so then.

It’s our job to show them that what they are doing is awesome, wonderful, powerful.

Because if we don’t praise them, who will? (And when I say this I am, of course, thinking of my students and some of their home situations.)

So, starting tomorrow, I’m going to be more aware of that student who needs praise but, thinking he or she doesn’t deserve, has his or her muscles already tensed and ready in an effort to deflect it should it come.

Maybe we could all take that one step tomorrow of praising the deserving, though they don’t expect it or will have trouble accepting it.

And with that praise–and maybe some attendant gentle constructive pointing to the arrows painted on the trail–we can also, sometimes, encourage them to stay on the proper course.  TZT